If you’ve ever wondered how to pronounce the word ‘freedom’ in Greek, you no longer have to guess, as some of our ENTERTAINER colleagues have been practising in our video above! In celebration of Greek Independence Day, we enlisted Vicky, our Head of Information, to give some of her colleagues a Greek lesson. A massive thank you to Logan, Saaniya, Seun & Martina – we think they all did very well, don’t you?

In addition, for this very special day, we also wanted to get in contact with some of our Greek experts in the office, who have very kindly shared some information on what happens on Independence Day. Please say hello to Mary, Maria & Vicky…

Mary: This public holiday marks the beginning of spring. We usually go for long walks with the kids in the country side. One of the most beautiful sights are the blossomed almond trees.

Maria: Apart from being of religious significance, this is a day about Greek history, as well as the strength and perseverance of the “Greek people” – it is a celebration of what it actually means to be Greek. Factually, it is the celebration of the commencement of the War of Greek Independence initiated by a number of Greek revolutionaries and leaders (now national heroes) against the Turks who had been occupying Greece for 400 years.  In Greece you will see Greek flags everywhere – in fact everyone takes out their Greek flag and places it on their balcony. On the day various parades take place in every city in Greece, with the official parade being a military parade in Athens, the capital of Greece. Everyone shouts “ZITO I ELLAS” which means “Long Live Greece!”

What are the traditions?

Mary: One of the traditions of Independence Day is having fried cod with garlic sauce for lunch. This is a signature dish of the Greek cuisine, and is so tasty!

What’s your favourite memory of this day when you were young?

Maria: My favourite memory of this day when I was young (I lived in Greece from the age of 6 to the age of 11 then moved back to Sydney) was being part of the parade and all the festivities at school. The parade is a student and military parade and whoever is the top student is given the responsibility of holding the flag. It was such a privilege and honour to hold the flag. Leading up to that day, events take place at school where each student is given a poem to recite (or part of a poem when you are younger) in front of the school and friends and family… I remember practising my poem and seeing my sisters practising, and then being on stage reciting the poem each year and watching others doing so too. There was so much national pride as well as fear (because that’s probably one of the first occasions as a little kid when you are asked to be on stage in front of others).

Mary: I remember attending the parade on the main street of our town. All the students were participating with great pride, and then we all went for ice cream afterwards.

Vicky: My favourite memory is also the student parade! We used to rehearse a couple of hours per day during the week leading up to the parade, and that meant less classes and less homework. After the parade was done, having coffee/lunch with friends and family was a must (usually outside, as the weather is pretty good in Greece this time of year).

How do you celebrate this day when you’re not in your home country?

Mary: This year, I will try to make the fried cod myself. It might not be as good as my grandma’s, but the house will get the whiff of it – that is the tradition!

Maria: Today, if you are not in Greece – or in Sydney where a similar but less spectacular celebration takes place by the Greek Community – the celebrations are not as interactive or social. We still say “ZITO I ELLAS” on the day and we still feel that national pride which comes from the occasion, but unfortunately no specific events take place – not unless you are an Angelo/Angela and you are celebrating your name day.

Vicky: I plan to celebrate this year by having the traditional fried cod in one of the Greek restaurants in Dubai, such as Eat Greek Kouzina. 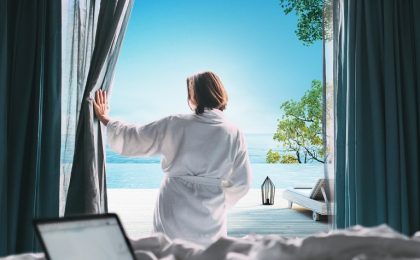 Do you love a late checkout? How about 3 days late? If you too have been bitten by the travel bug, but can’t justify spending out on a big holiday to your dream destination, we’d like to help you out…

Often referred to as the world’s wildlife capital city, Nairobi is a diverse cultural hub located in Kenya, East Africa. Despite being home to more than fifty of the world’s captivating national parks, Mombasa-style beach resorts, savannahs and stunning beaches,…

Undeniably one of the most stunning places on Earth, the Seychelles is almost like a dream, with the tropical beaches, nature reserves and marine wildlife. But what sets mainland Mahé apart from the rest? This captivating destination is more than…

We only regret the rides we don't take! Do somet

Which one are you? 😏 Either way, we love to se

We love getting all your questions about our new m

For all the vegans out there, this is for you!🍃

May the little lamp's of Diwali light up your life